Bad Cop...No doughnut for you 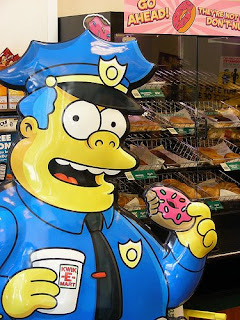 This all seems so silly.

No, he shouldn't have taken the doughnuts. However, by the time he took the 17th doughnut do you think that maybe, just maybe, he thought it was okay?

State police say an upstate New York college campus policeman was helping himself to free pastries at a local convenience store.
The Valero Nice N Easy offers free coffee to any police officer in uniform.
Sgt. Steve Brody of the Morrisville State College University Police stopped daily to buy a newspaper and pick up a free cup of coffee. He also routinely stuffed a pastry into his coat.
Brody is now accused of taking about $30 worth of pastries over at least 17 separate occasions.
Brody, 55, of Morrisville, was ticketed for petit larceny. Troopers say they have surveillance videos.
Brody and his defense attorney declined to comment. Brody remains an employee at Morrisville; school officials say the case is a personnel matter and refused further comment.
Posted by Sam at 7:06 AM