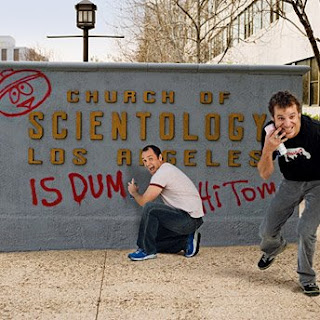 I'm not a Scientologist, now I'll get attacked by both.

Teenage Scientology Foe Charged
Member of "Anonymous" nabbed for January attack on church web sites
The Smoking Gun--A New Jersey teenager who considered himself a member of "Anonymous," the shadowy underground group that has targeted the Church of Scientology, was charged today with an online assault on the church's web sites earlier this year. Dmitriy Guzner, 18, allegedly was involved in a denial of service attack on Scientology web sites in January, a plot that "contributed to the unavailability of the web sites," according to a criminal information filed today in U.S. District Court in Los Angeles.

The information, charges that Guzner launched the online attack "because he believed the attack furthered the goals of the anti-Scientology group 'Anonymous,' of which he considered himself a member." Guzner, a Verona, New Jersey resident, has agreed to plead guilty to the felony count, according to a plea agreement he signed yesterday. The agreement estimates that the Church of Scientology suffered losses of between $30,000 and $70,000 as a result of the Internet attack.
Posted by Sam at 9:03 AM