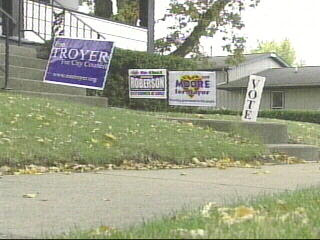 I always hated it when this happens.

I lost several hundred signs over my two campaigns. It costs big bucks to put out signs.

Ok then, rant over.

Political campaign posters disappear
By Chris Cobb The Herald-Zeitung
With the general election in less than a month, myriad campaign signs are being displayed proudly on front lawns throughout Comal County.

But it’s the number of those that have disappeared lately that’s rankling voters on both sides of the local political spectrum.Democratic and Republican officials said they’ve received numerous complaints of stolen campaign signs — some that have been staked in the ground for less than a day. Local party leaders say that while stealing signs might seem childish and of little consequence, it does real damage to fairness of the political process.

“The wonderful thing about our political system is that everyone gets to have a voice and having a campaign sign is a part of that,” said Robbi Boone, president of the Democrats of Comal County. Officials at the local Democratic headquarters said they’ve received at least 15 complaints of missing signs.Voters like Sandy Curtis have had enough. She had her Barack Obama sign her yard up for “quite some time” before it was stolen recently. The culprits then returned it a few days later — covered in graffiti.“It’s quite a shame,” said Curtis, who has since replaced her sign. She said numerous Obama signs in her neighborhood also have mysteriously disappeared. “But I’m not backing down from anybody. It’s my right to voice my opinion and they’re not going to keep me silent.”

Comal County’s Republican Party Chair Larry Nuckols said he’s also heard complaints about vanishing signs, something he said happens just about every time people head to the ballot box.“Every election cycle it seems like we get reports of signs being stolen,” Nuckols said. “And this year we’ve certainly had our fair share, too.”
Posted by Sam at 5:33 AM