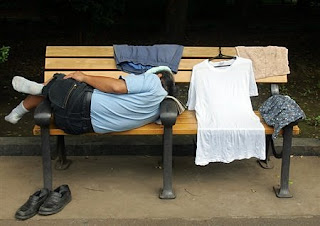 So how do you mail them their voter registration cards?

Oh wait, they just let them vote right after they register in Ohio.

Judge rules Ohio homeless voters
may list park benches as addresses
COLUMBUS, Ohio (AP) - A federal judge in Ohio has ruled that counties must allow homeless voters to list park benches and other locations that aren't buildings as their addresses.
U.S. District Judge Edmund Sargus also ruled that provisional ballots can't be invalidated because of poll worker errors.
Monday's ruling resolved the final two pieces of a settlement between the Northeast Ohio Coalition for the Homeless and Secretary of State Jennifer Brunner.
The coalition agreed to drop a constitutional challenge to Ohio's voter identification law until after the Nov. 4 election. In return, Brunner and the coalition agreed on procedures to verify provisional ballots across all Ohio counties.
The coalition was concerned that unequal treatment of provisional ballots would disenfranchise some voters.
Posted by Sam at 8:30 AM