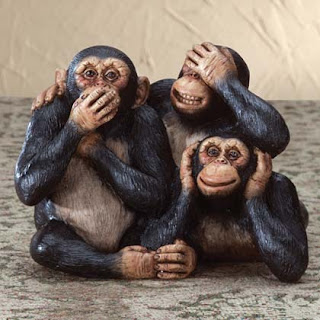 Okay so I don't really understand this in a way. I never took economics or a business class in college. I was too busy taking organic Chemistry, a class I really liked instead. (i was a sadist, what can I say?)

I mean it used to make me wonder how, when I travelled overseas on business I could, for instance, exchange $100 for 110 Egyptian pounds, the "official" exchange rate but at the bazaar I could get 200 Egyptian pounds for a $100 American Express check. I could then buy items for 1/2 the government rate essentially with the devalued money.

Or how a hamburger in Norway back in 1987 at Wimpy's (a McDonald's wannabe) cost me roughly $14 for a burger, fries and a soft drink. The equivalent cost in the States being roughly $2 at the time.

My conclusions were that its all a state of mind, a zen economy if you like. The market is what folks think it is, or should be.

Of course try telling that to Starbucks when they want $3 for a cuppa joe, or to your mortgage company.

All that money you lost - where is it?
Eric Carvin - Associated Press
NEW YORK (AP) -- Trillions in stock market value - gone. Trillions in retirement savings - gone. A huge chunk of the money you paid for your house, the money you're saving for college, the money your boss needs to make payroll - gone, gone, gone.
Whether you're a stock broker or Joe Six-pack, if you have a 401(k), a mutual fund or a college savings plan, tumbling stock markets and sagging home prices mean you've lost a whole lot of the money that was right there on your account statements just a few months ago.
But if you no longer have that money, who does? The fat cats on Wall Street? Some oil baron in Saudi Arabia? The government of China?
Or is it just - gone?
If you're looking to track down your missing money - figure out who has it now, maybe ask to have it back - you might be disappointed to learn that is was never really money in the first place.
Robert Shiller, an economist at Yale, puts it bluntly: The notion that you lose a pile of money whenever the stock market tanks is a "fallacy." He says the price of a stock has never been the same thing as money - it's simply the "best guess" of what the stock is worth.
"It's in people's minds," Shiller explains. "We're just recording a measure of what people think the stock market is worth. What the people who are willing to trade today - who are very, very few people - are actually trading at. So we're just extrapolating that and thinking, well, maybe that's what everyone thinks it's worth."
Shiller uses the example of an appraiser who values a house at $350,000, a week after saying it was worth $400,000.
"In a sense, $50,000 just disappeared when he said that," he said. "But it's all in the mind."
Though something, of course, is disappearing as markets and real estate values tumble. Even if a share of stock you own isn't a wad of bills in your wallet, even if the value of your home isn't something you can redeem at will, surely you can lose potential money - that is, the money that would be yours to spend if you sold your house or emptied out your mutual funds right now.
And if you're a few months away from retirement, or hoping to sell your house and buy a smaller one to help pay for your kid's college tuition, this "potential money" is something you're counting on to get by. For people who need cash and need it now, this is as real as money gets, whether or not it meets the technical definition of the word.
Still, you run into trouble when you think of that potential money as being the same thing as the cash in your purse or your checking account.
"That's a big mistake," says Dale Jorgenson, an economics professor at Harvard.
There's a key distinction here: While the money in your pocket is unlikely to just vanish into thin air, the money you could have had, if only you'd sold your house or drained your stock-heavy mutual funds a year ago, most certainly can.
"You can't enjoy the benefits of your 401(k) if it's disappeared," Jorgenson explains. "If you had it all in financial stocks and they've all gone down by 80 percent - sorry! That is a permanent loss because those folks aren't coming back. We're gonna have a huge shrinkage in the financial sector."
There was a time when nobody had to wonder what happened to the money they used to have. Until paper money was developed in China around the ninth century, money was something solid that had actual value - like a gold coin that was worth whatever that amount of gold was worth, according to Douglas Mudd, curator of the American Numismatic Association's Money Museum in Denver.
Back then, if the money you once had was suddenly gone, there was a simple reason - you spent it, someone stole it, you dropped it in a field somewhere, or maybe a tornado or some other disaster struck wherever you last put it down.
But these days, a lot of things that have monetary value can't be held in your hand.
If you choose, you can pour most of your money into stocks and track their value in real time on a computer screen, confident that you'll get good money for them when you decide to sell. And you won't be alone - staring at millions of computer screens are other investors who share your confidence that the value of their portfolios will hold up.
But that collective confidence, Jorgenson says, is gone. And when confidence is drained out of a financial system, a lot of investors will decide to sell at any price, and a big chunk of that money you thought your investments were worth simply goes away.
If you once thought your investment portfolio was as good as a suitcase full of twenties, you might suddenly suspect that it's not.
In the process, of course, you're losing wealth. But does that mean someone else must be gaining it? Does the world have some fixed amount of wealth that shifts between people, nations and institutions with the ebb and flow of the economy?
Jorgenson says no - the amount of wealth in the world "simply decreases in a situation like this." And he cautions against assuming that your investment losses mean a gain for someone else - like wealthy stock speculators who try to make money by betting that the market will drop.
"Those folks in general have been losing their shirts at a prodigious rate," he said. "They took a big risk and now they're suffering from the consequences."
"Of course, they had a great life, as long as it lasted."
Posted by Sam at 7:02 AM