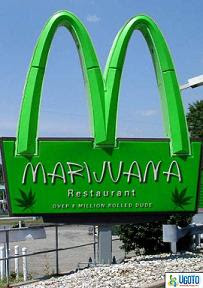 When the munchies strike, they strike.

You must do something, anything to satisfy the munchies.

VERO BEACH, FL (AP) -- A McDonald's cashier called 911 after a Vero Beach drive-thru customer allegedly offered to pay for his meal with marijuana.

The Indian River County Sheriff's Office said the cashier called Monday with a description of the vehicle the suspect had been riding in. A deputy spotted the vehicle, found marijuana in the car and arrested its occupant, 27-year-old Shawn Alexander Pannullo.

Pannullo was charged with possession of cannabis and posted $500 bail. It was unclear if he had an attorney.

A Sheriff's report did not say what the suspect ordered at McDonald's or if he ultimately purchased the meal using something other than marijuana.
Posted by Sam at 6:02 AM