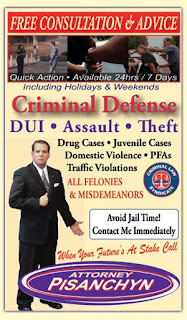 The appellate process isn't quite over yet.

But it will be soon.

BTW the picture isn't this lawyer.

Suspended San Antonio lawyer Ted H. Roberts, who extorted $100,000 from his wife's lovers, is another step closer to prison.
A three-judge panel of the 4th Court of Appeals on Wednesday upheld Roberts' conviction, finding that he misused civil litigation petitions to threaten and trick the men into giving him the money.

Roberts was convicted in March 2007 of three counts of theft by deception and coercion — charges related to two of four of his wife's lovers. Jurors acquitted him on two other counts.
His wife, Mary, also a lawyer, had met several of the men through adult dating Web sites.

A Bexar County jury determined Ted Roberts lied when he told the men the money would go to charity. Instead, it helped the Robertses buy a new home and finance their law firm.
He was sentenced to five years in prison but is out on bond. His attorney, Leslie Werner de Soliz, said Wednesday that she had not spoken to Roberts, but it was likely he would appeal again and ask to remain free.

The opinion appeared detrimental to Mary Roberts, who was convicted of all five counts of theft at her own trial and sentenced to 10 years of probation. She missed her appeal deadline but is still asking the court to accept it.

In August, she filed for divorce.

Ted Roberts — after learning that Mary Roberts had affairs in 2001 with at least four men — drafted petitions that said he was investigating the affairs and would file the documents in court, alerting the men's spouses and employers, unless the men paid him. He then delivered the papers to the men, or Mary Roberts did it herself. The petitions were never filed in court.
In at least two cases, Ted Roberts included language from the Texas Penal Code, claiming the men possibly committed a crime. The court viewed that as coercion because it gave the men a false impression of law or facts.

“The court upheld the arguments we were making all along ... that he acted with deception, that the 202 (petition) was simply a means of coercion and that he would just hold (the men) up to ridicule,” District Attorney Susan Reed said. “The court affirmed that, and I'm very pleased with that.”

Chief Justice Alma López, who wrote the opinion, said the panel was not convinced by any of Roberts' appellate arguments.
“Evidence was presented that Roberts was not acting in a reasonable reliance on the law in pursuing the Rule 202 petitions,” the court wrote.

A legal assistant testified Roberts was seeking vengeance, the court noted. Also, another witness testified Roberts' intent was to make the men pay, or “contribute to my favorite charity: me.”
The court noted that Roberts did not disclose the other affairs to the men. Instead, each was led to believe that he was the cause of the couple's marital problems.

As a result of their convictions, the State Bar of Texas suspended the Robertses' law licenses pending the outcomes of their appeals. In October 2004 the couple filed for bankruptcy, which is pending.
Posted by Sam at 6:45 AM