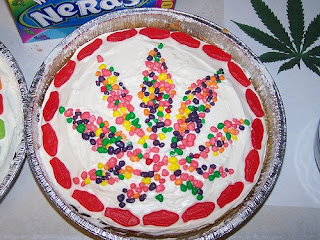 The only trouble the guest said was that he kept wanting more and more food after eating a slice.

WEST HARTFORD, Conn. (AP) -- West Hartford police said they charged a 51-year-old woman with assault, reckless endangerment and tampering with evidence after she allegedly served a marijuana-tainted ginger cake to her real estate agent.
Authorities said the 28-year-old man called 911 shortly after leaving her home Thursday, saying he felt sick. He was treated at a local hospital and released.
Medics initially thought he was allergic to the ginger cake. But police said they later determined the woman told someone else she had laced it with marijuana.
Police have ordered tests on the dessert.
The woman scheduled to be arraigned Friday in Hartford Superior Court. Information was not immediately available on whether she had an attorney.
Posted by Sam at 8:10 AM