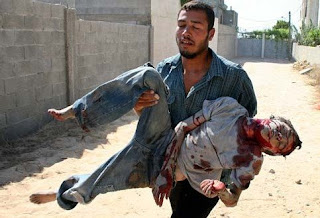 I'm sorry for the family but this is just utterly crazy.

I don't care that there is a supervising "certified instructor" there don't ya think letting an 8 year old fire an automatic Uzi submachine gun is a bit much?

BTW that so-called certified instructor was a real big help wasn't he?

WESTFIELD, Mass. (AP) - An 8-year-old boy died after accidentally shooting himself in the head while firing an Uzi submachine gun under adult supervision at a gun fair.
The boy lost control of the weapon while firing it Sunday at the Machine Gun Shoot and Firearms Expo at the Westfield Sportsman's Club, police Lt. Lawrence Vallierpratte said.
Police said the boy, Christopher Bizilj (Bah-SEAL) of Ashford, Conn., was with a certified instructor and called the death a "self-inflicted accidental shooting."
As the boy fired the Uzi, "the front end of the weapon went up with the backfire and he ended up receiving a round in his head," police Lt. Hipolito Nunez said. The boy later died at a hospital.
The boy's father and older brother were also there at the time, a gun club member and school official said. Francis Mitchell, a longtime member and trustee of the club, said he saw the boy's father supporting his son from behind after the shooting.
Although the death appears to be an accident, officials were investigating.
It is legal in Massachusetts for children to fire a weapon if they have permission from a parent or legal guardian and are supervised by a properly certified and licensed instructor, Lt. Hipolito Nunez said. The name of the instructor helping the boy was not released.
The event ran in conjunction with C.O.P Firearms and Training
"It's all legal & fun—No permits or licenses required!!!!" reads the ad, posted on the club's Web site.
Messages left on answering machines for the club and the C.O.P. group were not returned Monday.
Posted by Sam at 3:56 PM