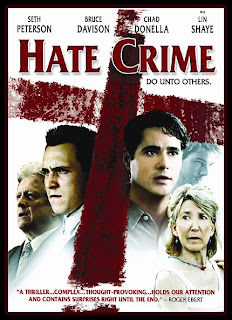 But in all actuality all crime is a hate crime, no?

Hate crimes down in S.A., but some categories see rise
By Jeorge Zarazua - Express-News
Hate crimes in San Antonio decreased last year, despite an upward trend in crimes targeting gays and people of different ethnicity, according to federal statistics released Monday.
San Antonio's figures were in line with the rest of the nation, which also saw a slight decline overall, but an increase in those two categories: sexual orientation and ethnicity.
The FBI reported more than 7,600 hate crime incidents last year, down about 1 percent from 2006. The decline was driven by decreases in crimes motivated by race and religion.
But crimes due to prejudice against sexual orientation, the third-largest category, increased about 6 percent, the report found. And crimes targeting people because of their ethnicity rose 2.3 percent.
In San Antonio, crimes due to ethnic bias increased to five last year from four in 2006, the report said. The number of crimes against gays remained unchanged at nine last year, but that figure is unusually high compared with previous years. In both 2004 and 2005, the city only reported a handful of attacks against gays.
Paul Scott, executive director of Equality Texas Foundation, an Austin-based equal rights group, said because of limited information available on hate crimes on a statewide level, it's unknown what is driving the increase of attacks on gays being reported.
Scott said he doesn't know if it's because of more aggression toward gays or if more people are willing to come forward and report their attacks.
“This is the issue that we have in trying to put together relevant information on what is happening,” he said, adding his organization has been advocating for a better James Byrd Jr. Hate Crimes Act, one that clarifies both reporting and enforcement procedures.
The FBI doesn't attempt to interpret increases in its Hate Crimes Statistic 2007 report, nor does it compare data from one year to the next because the number of law enforcement agencies participating in the annual count varies from year to year. More agencies contributed to the 2007 report than the 2006 report.
The data released Monday is consistent with previous years. Racial bias remained the most common motive in the United States, accounting for more than half of all reported hate crimes. Blacks, Jews and gays were the most frequent victims of hate crimes, the report found.
In San Antonio, the number of racially driven crimes dropped to eight last year from 13 in 2006. And there were no reported religious hate crimes last year.
Nationwide, more than a third of all hate crime incidents were categorized as vandalism or property destruction. Intimidation was the second-most common hate crime, followed by simple assault.
Posted by Sam at 7:20 AM