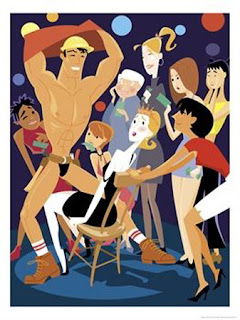 Yeah, I agree, how did he even get into the school?

EWING, N.J. (CBS 3) ― Authorities in Mercer County are investigating a bizarre incident in which a disoriented man gained entry to a high school and began to take off his clothes.The incident happened at about 12:30 p.m. at Ewing High School in Ewing Township. Officials said there were initial fears that the man, identified as 23-year-old Jovan Ramos, was armed.

Washington was just one of 100 classmates getting ready to leave gym class for lunch Monday when Ramos, who appeared angry, barged into school's gymnasium uninvited and began taking off his clothes."He proceeded to rip his shirt off and then take his pants off," Washington explained.

"At that point, this bizarre behavior -- him ripping his shirt off -- he was making comment of a religious nature, the teachers knew that the situation was not good," Detective Anthony Messina of the Ewing Township Police Department said. "Comments like he was Jehovah and that this was his house."

Ewing Township Superintendant Ray Broach released a statement that read in part: "As all doors are to be locked and secured at Ewing High School, we are currently investigating this breach of security."Ramos, charged with criminal trespass and lewd behavior, was administered a psychological evaluation following the incident.
Posted by Sam at 6:52 AM