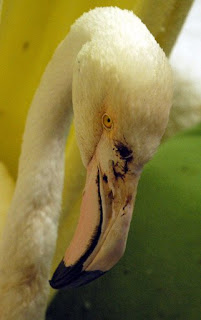 Four Australian teenagers were charged Thursday with attacking an almost blind greater flamingo that is believed to be the oldest bird of its kind in the world, police and zoo officials said.
The flamingo's head and beak were injured and it was bleeding from an eye after the attack at Adelaide Zoo that left it in a critical condition, zoo staff said.
"The bird arrived at the zoo in 1933 and was a mature bird at that stage," a spokeswoman for the zoo told AFP. "So although we don't know it's exact age it is at least 75 years old -- much older than they grow in the wild."
The zoo's website describes the bird as "undoubtedly the oldest flamingo in the world," adding that despite its great age its quality of life was very good.
Police said four men aged between 17 and 19 were charged with aggravated ill-treatment of an animal and released on bail to appear in court at a later date.
Several people at the zoo at the time of the attack had spoken about the incident with staff and officers wanted to interview them, a spokesman said.
The elderly bird, described as unafraid of humans, had a habit of coming close to the edge of his enclosure.
Known only as Flamingo One, he was sedated after the attack and was taken to the animal hospital where his condition was reported to be improving.
"He's just an icon, he's the oldest resident of the zoo, he's just a symbol of the beauty of nature," said the zoo's chief executive Chris West.
Zoo officials said the shocking attack had left them concerned for the wellbeing of a second flamingo -- the older bird's only companion for more than 50 years.
Posted by Sam at 8:16 AM