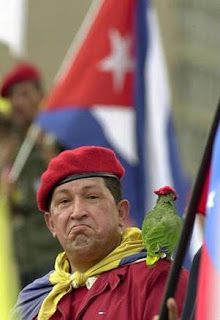 Here's a novel approach to making sure you win future elections.

CARACAS (Reuters) - Venezuelan President Hugo Chavez threatened on Saturday to imprison his main political rival, intensifying a campaign against a man he calls a crime boss just a month before he faces tough regional elections.
Opposition leader Manuel Rosales, who lost to Chavez in the 2006 presidential vote, is governor of the oil producing state of Zulia and is running for mayor of its capital Maracaibo.
"I am determined to put Manuel Rosales behind bars. A swine like that has to be in prison," Chavez said.
Chavez railed against Rosales at a gathering of businessmen in Zulia, urging the audience to vote against his rival for allegedly plotting to assassinate him, running crime gangs and illegally acquiring cattle ranches.
Chavez provided no specific evidence for the charges against the main leader of a fragmented opposition who has solid support in the oil-producing west of the OPEC nation.
Human rights groups say Chavez has increasingly exerted control over branches of power such as the judiciary and become intolerant of critics in almost a decade in power.
The former soldier typically takes to the offensive to stem a rise in support for potential rivals.
Chavez has been campaigning vigorously for his candidates in gubernatorial and mayoral races in the November 23 election but may lose some key posts as Venezuelans worry about crime, inflation and poor public services, pollsters say.
Chavez often makes dramatic threats in speeches without immediately carrying them out. Still, he does follow through on enough of them over time for his threats to concern the people he targets.
Posted by Sam at 8:41 AM