He was all thumbs 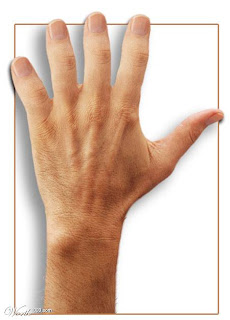 No more hitchhiking for this guy if the reattachment doesn't work out.

WASHINGTON (AP) - Police said a man suspected in an armed robbery at an alleged brothel in Washington's Columbia Heights neighborhood left some evidence at the scene - his thumb.
Police say a 22-year-old man and an accomplice made off with hundreds of dollars in cash in the Oct. 11 raid. According to charging documents, one of the victims took control of the suspect's silver machete and hacked off his right thumb.
About two hours after the robbery, a nine-fingered man went to an emergency room. Police caught up with him and brought the severed thumb to the hospital.
According to an arrest affidavit, a doctor told police the thumb "fits like a puzzle piece." The man was transferred to a Baltimore hospital to have it reattached.
On Tuesday, a judge ordered the Hyattsville, Md., man held without bond.
Posted by Sam at 8:21 AM