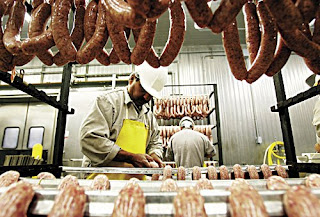 Sticking to our sausage theme for this morning.

A story about making the sausages for Wurstfest.

Putting the sausage in Wurstfest
By Scott Sticker The Herald-Zeitung
The New Braunfels Smokehouse set its burners on high to get fired up for Wurstfest, one of its biggest selling events of the year.“The Smokehouse has been involved with Wurstfest since the very first year,” said Vice President and General Manager Mike Dietert.

He said the company now supplies the majority of the sausage for the 10-day festival, about 30,000 pounds, which would stretch for about 5 miles when laid out link to link. The smokehouse also provides about 10,000 pounds of turkey legs, about 8,000 pieces of bread pudding and many other types of smoked meats and treats, including their wurst kabob, which has five kinds of sausage.

Smokemaster Rocky Tay put the first batch of Wurstfest sausage, about 600 pounds, in the natural hickory smoker Tuesday.According to Tays, the smokehouse uses both pork and beef for sausage that contains about 80 percent lean meat. He said the sausage makers use recipes straight from Germany.“Our wurst actually has a bite to it,” Dietert said. “I’ve had Germans come up and tell me this is the way the old guys made it.”

Though the Smokehouse started from only 20 sausage makers 60 years ago, Dietert said the company now employs about 75 people year-round and about 120 during Wurstfest and the holiday seasons.“We’re not just some little backyard barbecue pit here,” said Dietert.The New Braunfels Smokehouse was opened by the Russell Kemble Dunbar family in 1943 as a meat storing ice plant. The Dunbar family opened a tasting room in 1952, which spurred the opening of a full-service restaurant two years later.

While the Mike Dietert and his son Brandon manage the operation, a third generation of the Dunbar family — Susan Dunbar Snyder and her husband Dudley — own the New Braunfels Smokehouse. Along with Wurstfest, Smokehouse employees are getting ready for the increase in sales during the holidays.According to Tay, 1,200 turkeys are smoked every two hours in the two weeks leading up to Thanksgiving.“You can smell the smoke from the turkey all around the neighborhood in the mornings,” he said. “It’s very pleasant for the people that live around here.”

The New Braunfels Smokehouse smokes more than 1,500,000 pounds of meat each year and delivers more than 125,000 packages to customers worldwide.Tay said in the 44 years he has worked at the smokehouse, he is still not sick of the sausage.“It smells good, it tastes good and it’s a good way to make a living,” he said.
Posted by Sam at 8:04 AM