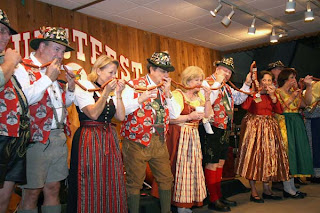 Ahhh, I can almost smell the sausages cooking from my office.

Starting tomorrow and lasting for 10 glorious days our town's festival and "Ode to sausages and beer" starts Friday, October 31st. Eat, drink (in moderation of course) and join in the fun.

48th Wurstfest just a day away
From staff reports The Herald-Zeitung
The 48th annual Wurstfest opens at 4 p.m. Friday with the Comal Community Band preceeding the official opening ceremony at 5 p.m. in the Wursthalle.The band will kick off opening ceremonies with the “Star Spangled Banner” and the German national anthem. After this, Wurstfest President Frank Witting — the first German native to serve in that capacity — Wurstfest President-elect and New Braunfels Mayor Bruce Boyer, and Wurstfest “Grosse Opa” Hal Herbelin, officially will open Wurstfest with the traditional “Das beissen der Wurst” or “the biting of the sausage” ceremony.“This year, we will not only have the mayor from New Braunfels, but also Wolfgang Keller, the mayor from Braunfels, Germany, at the opening ceremony,” Witting said.

Following opening ceremonies, the Cloverleaf Orchestra, also in its 48th year, will play at 6 p.m. in the Wursthalle. The Litt’l Fishermen Orchestra will take the stage at 8:30 p.m.In “Das Grosse Zelt” — The Big Tent — the seven-piece Austrian band, Höhberg-Buam, known for playing all the old Bavarian and Tyrolian-style Oktoberfest songs, will perform at 6 p.m. The Alex Meixner Band, which returns for its 10th appearance at the annual sausage festival, follows at 7:30 p.m.

There is no admission to the Wurstfest grounds from 4 to 7 p.m. on Friday. After that, admission costs $8 at the gate, however, children ages 12 and younger will be admitted free throughout the 10-day event. Group rates, advance discounts and special weekday promotions are available. Alcoholic drink tickets range in price from $4 to $6 each and food from the 31 vendors must be purchased with cash only, officials said.