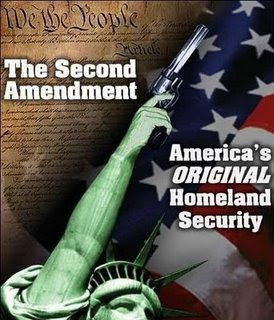 A note to burglars stay out of people's homes or suffer the consequences, eh?

No retreating necessary any longer, open fire and defend yourselves folks.

Also don't point the gun at them and tell to stop, that never seems to work out well in the movies.

Southeast Side homeowner kills intruder overnight
David Saleh Rauf - Express-News
A Southeast Side homeowner shot and killed an intruder early Thursday as the man tried to break into the residence through a bedroom window, police said.
It marked the second time in six weeks that a San Antonio homeowner killed an intruder. In at least three other instances this year, local property owners have shot and either wounded or killed a potential burglar.
Thursday's fatal shooting was sparked when 30-year-old Juan Trevino smashed part of a bedroom window and tried to enter the residence in the 1400 block of Greer Street around 3:10 a.m., a police report said.
Awakened by the sound of shattered glass, the homeowner, 53-year-old Paul Garner, noticed a figure outside the broken window. Garner grabbed his .45-caliber pistol as he saw Trevino lift the blinds and start to come through the window, the report said.
Fearing he was in “imminent danger,” Garner fired three rounds with his semiautomatic handgun through the smashed window, striking Trevino multiple times in the upper body, the report said.
Trevino — convicted in 1999 of burglary of a habitation and sentenced to six years of probation, according to county records — was pronounced dead at the scene.
San Antonio police spokeswoman Sandy Gutierrez said it appeared that Garner acted in accordance with the law when he shot Trevino and would not face charges.
Texas law permits residents to use deadly force to protect themselves, their home and property. That right was broadened last year when the Legislature passed the “castle doctrine,” which allows a person to use deadly force in self-defense against an intruder in the person's home, place of business or vehicle without having to retreat first.
Without that law in effect, Garner might have had to run into another part of his house — in an attempt to retreat — before he could use justifiable deadly force, Jefferson Moore, a San Antonio defense lawyer, said.
“Texas made it clear we don't a have a duty to retreat once you're inside your house,” Moore said. “The state of Texas doesn't want its own citizens being scared to protect themselves or their own property.”
He added: “At 3 a.m., people don't have police officers in their bedroom, so they have to do something.”
Since April, San Antonio property owners have shot at least five intruders.
In April, Thomas Thames fatally shot 18-year-old Ronnie Scarborough as he tried to break into Thames' Northeast Side residence. A little more than two months later, homeowner Brian Stevens critically wounded a 21-year-old intruder. And in August, a tattoo parlor owner shot and killed a 27-year-old man who threw a Molotov cocktail into his shop in the 3500 block of Blanco Road.
And in the first week of September, an East Side homeowner killed 42-year-old Johnny Rodriguez moments after he broke into the house through a back window.
No charges were brought against any of the property owners.
Posted by Sam at 5:51 AM