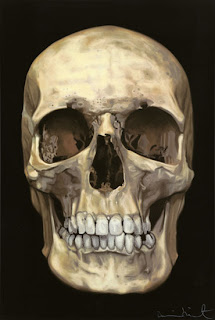 Okay, this is just weird.

Real weird, if not sick.

Skull In Suitcase
Posted By: Michelle Jacobs
TUCSON, AZ -- You've heard of skeletons in the closet.
But an Arizona woman apparently had a human skull in a suitcase.
According to police, the woman who owned the suitcase told them she was taking it to Philadelphia for a Halloween prop.
TSA screeners, who check all luggage before its loaded onto the airplane, found the skull packed in the suitcase.
They were alerted when the bag set off an alarm. Then it was put through a secondary inspection. That's when screeners saw the skull. After that, they called airport police.
Captain John Ivanoff of the Tucson Airport Authority said "we looked at it further and tried to determine who it belonged to and why it was there?"
Tucson police were also called in. They questioned the woman and searched her home.
She told them the skull belonged to her boyfriend and that it had been sitting in the garden for about four years.
Dr. Bruce Anderson of the medical examiner's office verified that.
Dr. Bruce Anderson said "this was sitting on the ground in a garden in the dirt with some algae or moss growing."
Airport police credit the screeners, saying their attention to detail is what keeps passengers safe.
John Sides of the TSA says "it's hard to say what you might find in there but it's imperative they do that security job that the citizens expect them to do."
The County Medical Examiner says the skull is that of a man. 20 to 30 years old, of Asian or Japanese decent.
The office is keeping it for further examination.
The woman who was questioned was released and continued her trip, without the skull she had carried in the suitcase.
Posted by Sam at 6:02 AM