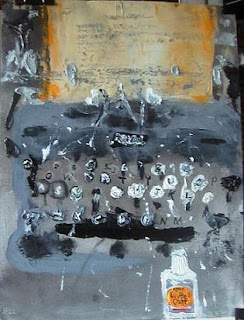 Liquid wite-out covers a lot of mistakes, just not this kind apparently.

Wite-Out drinker sentenced to prison
By TODD COOPERWORLD-HERALD STAFF WRITER
Juan Briceno had to swallow hard, again, on Friday.The four-time drunken driver who drank Wite-Out to try to mask his breath from police was sentenced to 18 months to two years in prison for felony drunken driving.
Briceno, 33, and his attorney, David Nich Jr., had begged for probation, saying that Briceno realizes he has a drinking problem and had entered an outpatient treatment program.But Douglas County District Judge Thomas Otepka said he had no choice but to send the correction fluid guzzler to a correctional facility.

First of all, Otepka said, Briceno has been caught driving drunk four times — in 1998, 1999, 2000 and 2007.Though Briceno had received probation for the other offenses, Otepka said, he obviously hadn't addressed his addiction.And particularly troublesome, the judge said, was Briceno's continued denial that he was driving May 1, 2007.

A Douglas County jury convicted him of the offense in July after a mechanic testified that he had seen Briceno peeling out in a parking lot near 24th and I Streets.The mechanic called police. Omaha police arrived and found Briceno eating a burrito at a nearby taco stand.After taking him to Central Police Headquarters downtown, officers escorted him to a desk in a room where police administer breath tests to suspected drunken drivers.

On a surveillance videotape, Briceno could be seen tapping a correction fluid bottle on a desk. After a police officer left the room, Briceno twirled the bottle and rolled it on the desk.He glanced over his shoulder, twisted off the cap and took a gulp.He capped the bottle, then wiped his mouth with his hand and T-shirt.The video then shows Briceno trying to hide his mime-white lips from the officer — to no avail.

No one knows if Briceno's experimental masking agent worked.Instead of testing his breath, Omaha police simply took him to a hospital for a blood test.The test revealed that his blood-alcohol content was .287, three and a half times the legal limit.

Otepka said Briceno's liquid courage was further evidence of his guilt. The judge revoked Briceno's driver's license for 15 years."Maybe he doesn't remember sitting in the police interview room and drinking Wite-Out so he could cover up the crime," Otepka said of Briceno's denials. "I think reality needs to set in here before someone gets killed."
Posted by Sam at 8:11 AM