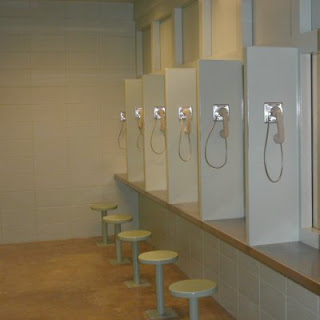 Aside from the obvious, that the calls of these folks should be circumscribed to prevent harassment, it is very sad that a guard or guards is involved.

Perhaps TDCJ will want to revisit their pay scales for these guards?

Cell phone spurs Texas prisons lockdown
By Jennifer Latson - Houston Chronicle
Ten inmates on Texas' death row, aided by a prison guard working for bribes, made nearly 3,000 cell phone calls in the last 30 days, including several to state Sen. John Whitmire, state officials revealed Monday.
The announcement prompted Gov. Rick Perry to order a statewide prison lockdown Monday afternoon and to search every inmate, staff member and visitor for contraband. Earlier in the day, police arrested one inmate's mother for allegedly footing the phone bill, while investigators prodded the prisoners to name the guard who supplied the phone.
Death row inmates are held in 24-hour isolation and are forbidden any contact with the outside world. But state officials say they have confiscated 19 cell phones from death row prisoners this year.
"This isn't isolated. We have severe security breaches in all or most of our prisons,'' said Whitmire, who said he was shocked and shaken by Tabler's phone calls over the past two weeks. "There is a tolerance of contraband that is unacceptable.''
In a series of calls starting Oct. 7, Tabler asked Whitmire - who represents north Houston and Harris County - to help him find a pro-bono attorney to revisit his case, and to coax prison officials into allowing him to see his mother and grandmother. Tabler, who confessed to killing two teenage girls and two adult men in 2004, told Whitmire he knew where the senator's daughters lived.
Whitmire spoke about the phone calls only with his family, with state Inspector General John Moriarty, who is tasked with investigating prison crimes, and with Mike Ward, an Austin newspaper reporter who was also in contact with Tabler.
Ward, too, kept his conversations under wraps and worked with Whitmire and Moriarty to help trace the cell phone's path within and between the most heavily secured of prison walls.
During the phone calls, Whitmire said he tried not to ruffle Tabler or arouse his suspicion.
"I said, 'How did you get a phone?''' Whitmire recalled of his first conversation. ``He said, '$2,100.' I said, `How are you charging it?' He said, `I have a charger.'''
Moriarty traced the cell phone to within the Livingston prison where Tabler is awaiting the death penalty. The inspector also found that Tabler's mother, Lorraine Tabler, was paying for the phone's minutes from her home in Georgia. And he discovered that the same phone had been used by as many as nine other inmates, all of them known gang members, to place 2,800 calls. Their relatives sent payments to Tabler's mother to offset the phone bill.
Many of their calls went to fellow gang members outside of prison, Whitmire said. They also called relatives and anti-death penalty advocates, he said.
Monday's crackdown was hatched after Whitmire learned that Tabler's mother would be landing in Austin around 9 a.m. to visit her son. While police staked out the airport, Ward got Tabler on the phone so investigators could catch him with it, Whitmire said.
A random search of Tabler's prison cell last week had come up short. Tabler told Whitmire he had handed the phone off to a guard in advance.
As police arrested his mother in Austin on Monday, investigators surprised Tabler in his cell.

Before they snatched the phone, Whitmire said, Tabler made a final threat to the reporter: ``I will Google you. I can find out what you drive.''
Ward did not return phone calls seeking comment Monday. Whitmire is taking extra precautions to keep his family safe, he said.
"I'm still in shock. I've never had any experience with a death row inmate,'' he said. ``No one should have to deal with what I've gone through in the past two weeks. Can you imagine the fear of crime victims, police, prosecutors and jurors who locked these people up? These folks have nothing to lose, and they have contacts in gangs still on the streets of Texas.''
Whitmire, who heads the senate's criminal justice committee, says he will call today for new security measures to prevent guards from carrying contraband, including metal detectors, surveillance cameras, and search dogs at all prison gates.
"Correction officers work for low pay in a very dangerous environment,'' he said.
"We need to support them, but we need to find and prosecute every crooked officer. I just think you need to ask the honest correction officers to help clean the mess up.''
Posted by Sam at 6:01 AM