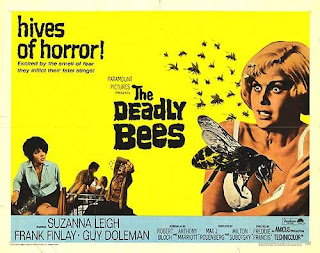 The killer bees are back!!

Run for your lives!

Bees kill 3 dogs, injure woman, 70
By MITRA MALEK Palm Beach Post Staff Writer
RIVIERA BEACH — Bees that had been living on the shutters of a vacant house in the Woodbine neighborhood have killed three dogs and injured a 70-year-old woman.
Nancy J. Hill stepped outside her Dorado Drive home at about 4:30 p.m. Friday to walk her two dachshunds. She made it 15 feet from the door when the bees swarmed her, then killed the 7-year-old dogs, Hill's husband Brian said.

"They were out to hurt seriously," said Brian Hill, who was stung a couple of times himself. "It wasn't a question of physical size. These guys were really powerful."
Palm Beach County Animal Control said Friday that the bees also stung two pit bills, killing one and sending the other to the hospital.
Emergency officials transported Nancy Hill to the hospital, where she remained for several hours Friday night while medical personnel removed stingers, her husband said.
Police restricted access to Dorado Drive from about 5 p.m. Friday through noon Saturday so that officials could contain the swarm. They advised residents to stay inside with their pets. At about noon, pest control workers destroyed the hive, and the street reopened.
Animal Control Capt. Dave Walesky said Friday it would take lab tests to determine whether the bees were Africanized "killer" bees.
Posted by Sam at 8:33 AM