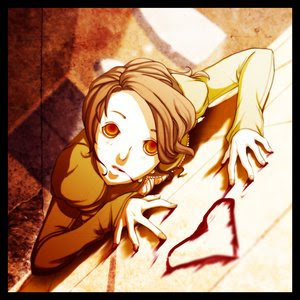 More of "I do strange things because I love you too much."

Also call me cynical but it seems too coincidental that this guy who stabbed someone (okay, allegedly *snort*) also happened to be in the car when his girlfriend drove into a lake where she died.

Man in drowning case jailed in stabbing
By Michelle Mondo - Express-News
When Concha Ramos saw that the ex-boyfriend of her deceased daughter was arrested and accused of stabbing a man in a jealous rage, she was not surprised.
She had always had doubts about John Flores, 27, who was known for his jealous nature.
Early Thursday, police arrested Flores less than an hour after an attack that sent another man to the hospital in critical condition.
Lauriano Gomez, who celebrated his 21st birthday in the hospital, was upgraded to stable condition Thursday afternoon. The attack unfolded, police said, around 1 a.m. at a home in the 100 block of Aganier Avenue after a fit of jealousy prompted Flores and two friends to break into Michele Solana's house. Once inside, Flores stabbed Gomez six times.
Charged with aggravated assault with a deadly weapon, Flores remained jailed Thursday in lieu of $75,000 bail, officials said.
Ramos saw Flores on the news. It took her back to when Flores dated her 20-year-old daughter Crystal Marie Torres, who died under what she called suspicious circumstances.
On Jan. 21, 2007, Torres was in a car with Flores when just before 4 a.m. it was driven into Woodlawn Lake. Flores made it out of the car, but Torres drowned. The Bexar County medical examiner determined the death an accident.
But Torres' family always had questions about the accident: Who exactly was driving the car, why were there no skid marks going into the lake and why did Torres, a good swimmer, die?
Ramos said her daughter was considering leaving Flores. He was notoriously jealous, and Torres was getting sick of it.
Apparently, so was Solana, said her 16-year-old brother, Michael.
Michael Solana said he has known Flores for about nine years, and that at times it's hard to tell when Flores is telling the truth. He would often link himself to well-known gangs but no one saw proof of it, Solana said.
Attempts to reach Flores' family and the San Antonio Police late Thursday afternoon were unsuccessful.
Ramos said police told her that the case was submitted to the District Attorney's Office for review. She said she believed the case had been closed.
No one from the District Attorney's Office was available Thursday evening for comment. Ramos plans on contacting the DA's office to see if she can get her daughter's case reopened.
“I'm glad they caught him,” she said. “I want justice.”
Posted by Sam at 6:49 AM