No wonder Congress has such a low approval rating 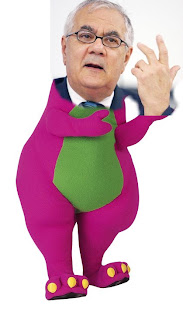 Okay, I call bullshit on this.

You see, if folks cannot pay mortgages then they shouldn't get one.

Look where you schmucks led us to with your encouragement for sub-prime lending.

Ass, and I insult asses everywhere by calling you one.

BOSTON (AP) - Rep. Barney Frank said Monday that Republican criticism of Democrats over the nation's housing crisis is a veiled attack on the poor that's racially motivated.
The Massachusetts Democrat, chairman of the House Financial Services Committee, said the GOP is appealing to its base by blaming the country's mortgage foreclosure problem on efforts to expand affordable housing through the Community Reinvestment Act.
He said that blame is misplaced, because those loans are issued by regulated institutions, while far more foreclosures were triggered by high-cost loans made by unregulated entities.
"They get to take things out on poor people," Frank said at a mortgage foreclosure symposium in Boston. "Let's be honest: The fact that some of the poor people are black doesn't hurt them either, from their standpoint. This is an effort, I believe, to appeal to a kind of anger in people."
Frank also dismissed charges the Democrats failed on their own or blocked Republican efforts to rein in the mortgage companies Fannie Mae and Freddie Mac. The federal government recently took control of both entities.
House Minority Leader John Boehner of Ohio called Frank's remarks "a lame, desperate attempt to divert Americans' attention away from the Democratic party's obstruction of reforms that would have reined in Fannie Mae and Freddie Mac and helped our nation avoid this economic crisis."
"Congressman Frank should retract his ridiculous statements and start taking responsibility for the role he and other top Democrats played in putting Main Street Americans in this mess," Boehner said.
Frank said Republicans controlled Congress for 12 years and passed no regulation, while Democrats passed a Bush administration Fannie and Freddie regulation package since gaining control of the House and Senate in January 1997.
"If I could have stopped a Republican bill during the Bush years, I would have started with the war in Iraq. Then I would have gone to the Patriot Act. Then I would have gone on to the hundreds of millions in tax cuts," said Frank, to applause from the audience.
The longtime congressman is being challenged this fall by both Republican and independent candidates. He has been criticized in his liberal district for being one of the leaders of congressional efforts last week to win approval of a $700 billion Wall Street bailout plan.
Posted by Sam at 7:54 AM