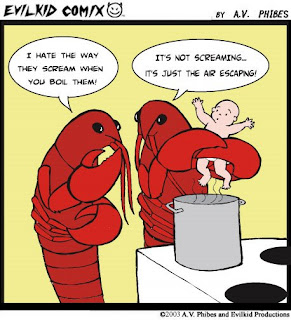 No? They don't have pincers?

It still seems so wrong on so many different levels.

SAN DIEGO (AP) ― A San Diego man who was allegedly poaching lobsters was caught with six of the creatures stuffed down his pants.
Thirty-three-year-old Binh Quang Chau, who has been cited four times for poaching, allegedly took the lobsters from the La Jolla State Marine Conservation Area.

Department of Fish and Game warden Daryl Simmons says wardens arrested Chau when they noticed "odd bulges" in his pants. All six of the newspaper-wrapped lobsters were still alive and were returned to the ocean.

Lobsters in the San Diego area do not have pincers.
Posted by Sam at 5:59 AM