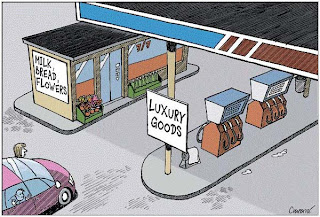 IMHO from what I've seen in our history of responses to crisis I believe the answer to this question will be a resounding NO!!

We don't conserve, we don't cut back. As gas prices fall so will the resolve to conserve.

Sorry to be such a gloomy Gus this morning.

As gas falls, will we still conserve?
Ken Rodriguez - Ken Rodriguez
The line of cars waiting to gas up at Sunny's Ice & Food stretched for two blocks on West Avenue.
With crushing demand and only four fuel pumps, the manager, his brother-in-law and father spent a good chunk of Monday directing traffic.
Some motorists were honking. Others were yelling. A few were trying to cut in line.
Hey, it's been a while since San Antonio could get regular unleaded for $2.89 a gallon.
“I was here from 9:30 in the morning until 10:30 at night,” says the manager, who will only identify himself as Ali.
It was crazy, all right. Ali didn't go home until the store ran out of gas.
At midafternoon Tuesday, only one other local station was selling gas for $2.89: Nassau Food Mart on Nassau Drive near West Avenue.
Thankfully, fuel prices are falling across the city. In some places, they're almost dropping like the Dow.
According to one Web site — www.sanantoniogasprices.com — more than a dozen area stations are selling regular unleaded for less than $3 a gallon.
And that got me to thinking: Will falling gas prices slow or reverse recent surges in carpooling, bicycling and walking?
Will more affordable fuel cut into passenger totals at VIA Metropolitan Transit?
VIA doesn't think so. Preliminary numbers show ridership in September jumped 15.5 percent from the same time last year. Historically, ridership is strong in October. And VIA plans to add service soon on the Northwest Side.
“We suspect more customers will continue riding,” says VIA spokeswoman Priscilla Ingle.
Transportation planners say she might be right. Surveys show new passengers are enjoying the benefits of the bus: saving on gas, helping the environment, reading on the way to work. What's not to like about a stress-free, rush-hour commute?
To some degree, fuel prices are as wildly unpredictable as the stock market. They peaked at $4 a gallon in the summer, then began to drop. They jumped when Hurricane Ike hit in September, then fell again.
Scott Ericksen, public involvement coordinator for the Metropolitan Planning Organization, knows what will happen if prices keep falling. Some motorists will revert to old driving habits. But he's optimistic many new habits will stick.
At 10 a.m. Tuesday, 11 local stations were selling fuel for less than $3. By 3:30 p.m., the number had jumped to 14.
Sunny's was one of them, back in business with a full supply of fuel.
The price for regular had not changed when I pulled in, but the lines had disappeared. I parked in front of a vacant fuel pump.
Where had everyone gone?
Perhaps to the nearest ATM or to another station. Posted on Sunny's fuel pumps were handwritten notes: Cash only.
Ali, the manager, says his debit card machine broke. So a store that sold gas for $2.89 was hurting for business.
Back on the streets, it was business as usual. Transportation leaders say an emerging group of commuters was still biking and carpooling to work.
“We hope that will continue,” Ericksen says.
Hope is the operative word. With tumbling gas prices, there's no guarantee.
Posted by Sam at 6:41 AM