DWB (driving while Black or Brown) 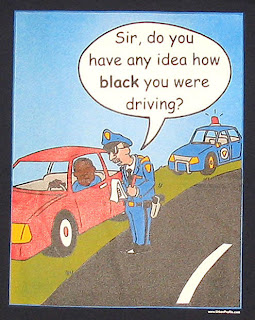 This is news? Ask anyone, anybody in this country and they would have known this.

I guess it is good to have the data quantified since apparently the LAPD still doesn't believe it happens.

Study finds LA police stop more blacks than whites
By THOMAS WATKINS Associated Press Writer
LOS ANGELES (AP) -- A report by a civil liberties group has found that Los Angeles police officers are more likely to stop and search black and Hispanic residents than they are whites, even though whites are more often found carrying guns and contraband.
"The results of this study raise grave concerns that African-Americans and Hispanics are over-stopped, over-frisked, over-searched, and over-arrested," said report author Ian Ayres, a Yale Law School economist and professor.
Ayres' report, published Monday by the American Civil Liberties Union of Southern California, analyzed the Los Angeles Police Department's own accounts of 810,000 pedestrian and motor vehicle stops in the year from July 2003 to June 2004.
Even after researchers controlled for demographics and neighborhood crime rates, they found significantly higher stop rates for black and Latino residents. For every 10,000 residents, blacks were nearly three times more likely to be stopped than white and other "non-minority" residents, facing 3,400 more stops. Hispanics were stopped on 350 more occasions.
Even though Ayres used the LAPD's own data, his findings were at odds with an earlier analysis carried out for the department. The LAPD acknowledged racial disparities in some divisions but, after controlling for several variables, found "no consistent pattern of race effects."
Ayres, however, said one officer stopped more than 100 blacks and 100 Hispanics but only one white. The professor did not include that officer in his analysis because it was an extreme situation and could skew results.
A summary of Ayres' report states that during the past five years the LAPD has received nearly 1,200 citizen complaints alleging racial profiling, but the department hasn't sustained a single one.
"Los Angeles officials have yet to acknowledge the scope of the problem of racially biased policing or to fully embrace solutions," the summary stated.
Police Chief William Bratton said he disagrees strongly with the report's findings and interpretation.
"This department does not engage in racial profiling, has not. We have significant safeguards built in to protect against that," Bratton said Monday at a press conference. "Nobody investigates allegations of racial bias or racial profiling more aggressively than this department, this commission and this inspector general."
Tim Sands, president of the Los Angeles Police Protective League union, strongly disputed the report's findings and pointed out that the department mirrors the racial demographics of Los Angeles, with more Hispanic officers than white officers.
"Dr. Ayres is trying to manipulate existing data to prove what 9,700 individual officers are thinking when they make traffic stops - which is an exercise that might work on a spreadsheet at Yale, but doesn't work on the streets of Los Angeles," Sands said.
Posted by Sam at 5:48 AM