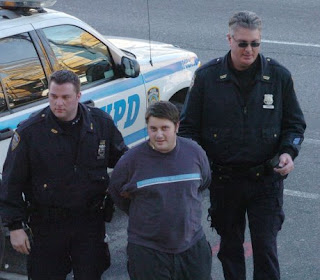 My guess is he figured he'd come out to the "country" from the big city and rip off the bumpkins.

Police arrest suspect in 2 robberies
From staff reports The Herald-Zeitung
Police have arrested a suspect they believe to be responsible for two recent robberies in New Braunfels.Charles Anthony was detained by San Antonio Police Department Tuesday in connection with hold-ups at a shoe store and a gas station in New Braunfels in the span of a week.
Authorities believe the 43-year old made off with an undisclosed amount of money after demanding it from an employee just before noon on Oct. 1 at the Payless Shoe Source at 604 S. Walnut Ave. He was believed to be unarmed.Anthony also is accused of robbing the Fastway Food Mart on 1412 E. Common St. at about 1:30 a.m. on Monday.

Although he managed to get away in both instances, SAPD and the New Braunfels Police Department worked together to issue warrants and make the arrest after a brief investigation.“We basically put our information together with theirs and were able to not only identify him, but apprehend him as well,” said NBPD Spokesman Sgt. Mike Penshorn.

Anthony is being charged with two counts of robbery, a second-degree felony, and faces two to 20 years in prison and a fine of up to $10,000. He was being held in Bexar County Jail Tuesday on a $125,000 bond for both crimes.
Posted by Sam at 7:17 AM