One vote per live person only please 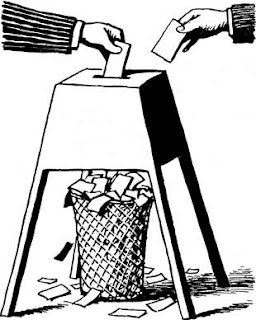 This oughta make all of you upset with the system and the way ACORN abuses it. I don't care what side of the aisle you vote on or what party you adhere to.

This is just plain wrong.

CLEVELAND - A man at the center of a voter-registration scandal told The Post yesterday he was given cash and cigarettes by aggressive ACORN activists in exchange for registering an astonishing 72 times, in apparent violation of Ohio laws.
"Sometimes, they come up and bribe me with a cigarette, or they'll give me a dollar to sign up," said Freddie Johnson, 19, who filled out 72 separate voter-registration cards over an 18-month period at the behest of the left-leaning Association of Community Organizations for Reform Now.
"The ACORN people are everywhere, looking to sign people up. I tell them I am already registered. The girl said, 'You are?' I say, 'Yup,' and then they say, 'Can you just sign up again?' " he said.
Johnson used the same information on all of his registration cards, and officials say they usually catch and toss out duplicate registrations. But the practice sparks fear that some multiple registrants could provide different information and vote more than once by absentee ballot.
ACORN is under investigation in Ohio and at least eight other states - including Missouri, where the FBI said it's planning to look into potential voter fraud - for over-the-top efforts to get as many names as possible on the voter rolls regardless of whether a person is registered or eligible.
It's even under investigation in Bridgeport, Conn., for allegedly registering a 7-year-old girl to vote, according to the State Elections Enforcement Commission.
Meanwhile, a federal judge yesterday ordered Ohio's Secretary of State to verify the identity of newly registered voters by matching them with other government documents. The order was in response to a Republican lawsuit unrelated to the ACORN probe in Cuyahoga County, in which at least three people, including Johnson, have been subpoenaed.
Bribing citizens with gifts, property or anything of value is a fourth-degree felony in Ohio, punishable by up to 18 months in prison. And it's a fifth-degree felony - punishable by 12 months in jail - for a person to pay "compensation on a fee-per-registration" system when signing up someone to vote.
Johnson, who works at a cellphone kiosk in downtown Cleveland, said he was a sitting duck for the signature hunters, but was always happy to help them out in exchange for a smoke or a little scratch. He'd collected 10 to 20 cigarettes and anywhere from $10 to $15, he said.
The Cleveland voting probe, first reported by The Post yesterday, also focused on Lateala Goins, who said she put her name on multiple voter registrations. She guessed ACORN canvassers then put fake addresses on them. "You can tell them you're registered as many times as you want - they do not care," she said.
ACORN spokesman Kris Harsh said the group does not tolerate its workers paying people to sign the voter-registration cards.
ACORN's political wing has endorsed Barack Obama for president, but Ben LaBolt, a spokesman for the Obama campaign in Ohio, said ACORN has no role in its get-out-the-vote drive.
During the primary season, however, the Obama camp paid another group, Citizen Service Inc., $832,598 for various political services, according to Federal Elections Commission filings. That group and ACORN share the same board of directors.
In Wisconsin yesterday, John McCain blasted ACORN.
"No one should be corrupting the most precious right we have, that is the right to vote," he said.
It's a right Johnson will exercise. "Yeah, I've registered enough - I might as well vote."
Posted by Sam at 8:18 AM