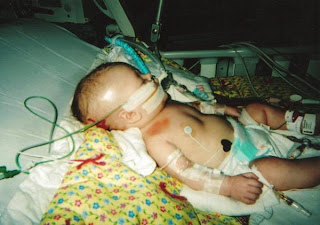 I predict a guilty verdict however, jurors will probably be less than enchanted at the antics of the "bad" cop in the routine. So who knows?

Except there is an injured baby and jurors do not like that.

Shaken baby case close to going to jury
Graeme Zielinski - Express-News
Closing arguments are expected today in the much-publicized case of a 39-year-old woman accused of shaking and injuring a 5-month-old in her care in 2006.
Aritzaid Santiago, facing charges of injury to a child, has steadfastly denied violently shaking Nathan Bonano, who today is a few days shy of his third birthday.
Nathan suffered bleeding in his brain and retinas in April 2006 and underwent emergency surgery.
Members of his medical team, as well as an expert, have already testified for the prosecution, saying his injuries were consistent with what's known as “shaken baby syndrome.”
But Santiago's defense team Thursday brought an expert of their own who disputed the conclusions and instead said that because to pre-existing characteristics of his brain, Nathan's injuries could have been caused by merely innocent handling.
Santiago has been free on bond since her arrest and after a lengthy investigation by Texas Child Protective Services retains custody of her 3-year-old twins.
Meanwhile, on the third day of her trial in the 226th District Court, a videotape of her tearful 2006 interview with San Antonio police detectives was played for jurors. Depending on the interpretation, the interview, after which Santiago was arrested, was either exculpatory or incriminating.
Santiago's answers were in Spanish, so the jury was given both the prosecution's and the defense's translated transcript.
She repeatedly deflected the accusations of Detective Joseph Dubs, who, playing “bad cop,” asked her to confess and angrily told her the jury was going to view her as an “animal” if she did not tell the truth.
In the tape, Santiago picked up a teddy bear to demonstrate that she merely tossed the crying baby in the air gently in hopes of stopping his crying.
With Dubs out of the room, Santiago tells the Spanish-speaking detective, “Look, I swear by God that I did not do this with intention.”
Later, Richard Hershberg, a Houston neurosurgeon with a long resume who retired in 1994, testified that his review of the medical records led him to conclude that pre-existing factors led to Nathan's injuries.
He noted that the baby did not have any of the common markers of abuse associated with shaken baby syndrome, including fractured bones or bruises.
“I would not have referred this to law enforcement,” Hershberg testified.
Posted by Sam at 5:41 AM