They know how to have fun down-under 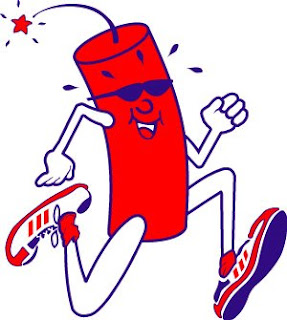 I'd run up and down the street too in my underwear if I had exploding firecrackers strapped to my head.

It would not be a pretty sight.
Underwear-clad man ignites fireworks

MOUNT ISA, Australia (UPI) -- Authorities in Mount Isa, Australia, said a man was arrested after he allegedly ran down the street in his underwear with firecrackers strapped to his head.
Mount Isa Superintendent Les Hopkins said the 22-year-old man allegedly ran up and down Camooweal Street in the city center wearing only his underwear and a bicycle helmet with detonating firecrackers bound to it, The (Brisbane, Australia) Courier-Mail reported Monday.
"He was running close to one of our main roads, where the big road trains travel," Hopkins said. "It could have been quite tragic."
The man was charged with possession of fireworks and being a public nuisance. He was released after posting bail.