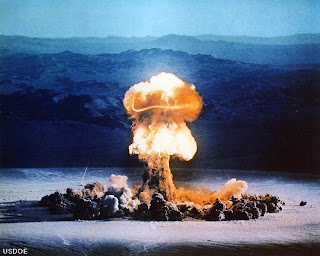 This just makes me feel really, really secure and confident in how our government handles its nuclear arsenal.

And some want this same government to run our health care system as well as our banks and everything else. Well, we'll see how well that will work out for us as well.

DENVER (AP) - A fire caused $1 million worth of damage at an unmanned underground nuclear launch site last spring, but the Air Force didn't find out about it until five days later, an Air Force official said Thursday.
The May 23 fire burned itself out after an hour or two, and multiple safety systems prevented any threat of an accidental launch of the Minuteman III missile, Maj. Laurie Arellano said. She said she was not allowed to say whether the missile was armed with a nuclear warhead at the time of the fire.
Arellano said the Air Force didn't know a fire had occurred until May 28, when a repair crew went to the launch site—about 40 miles east of Cheyenne, Wyo., and 100 miles northeast of Denver—because a trouble signal indicated a wiring problem.
She said the flames never entered the launch tube where the missile stood and there was no danger of a radiation release.
The fire, blamed on a faulty battery charger, burned a box of shotgun shells, a shotgun and a shotgun case that were kept in the room, Arellano said. A shotgun is a standard security weapon at missile silos.
Arellano said the battery chargers at all U.S. missile launch site have been replaced.
She said the incident wasn't reported sooner because of the complexity of the investigation.
The damage from the fire was estimated at $1 million, including the cost of replacing damaged equipment and cleanup.
An Air Force report of the incident released Thursday found flaws in the technical orders for assembling battery charger parts, inspection procedures and modifications of the launch complex ventilation system. It was also critical of the presence of flammable materials.
Cheyenne Mayor Jack Spiker, who said he learned of the incident when contacted by a reporter Thursday, said the fire doesn't undermine his confidence in the safety of the missile operations.
"It's rare that they have an accident, and the accidents have never really, that I know of, amounted to much because of the safety devices that are built into the system," he said.
The revelation was the latest in a string of embarrassing missteps involving the nation's nuclear arsenal. In 2006, four electrical fuses for ballistic missile warheads were mistakenly shipped to Taiwan, and in 2007, a B-52 bomber was mistakenly armed with six nuclear-tipped missiles when it flew between Air Force bases in North Dakota and Louisiana.
The Air Force announced last week it was setting up a new Global Strike Command to better manage its nuclear-capable bombers and missiles.
Posted by Sam at 6:59 AM