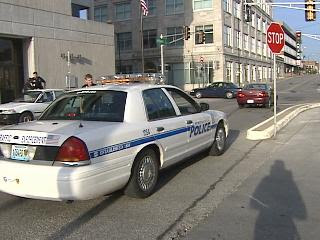 I sure hope she recovers soon and completely

We wish you well Officer Johnson and pray for your recovery.

A police officer suffered life-threatening injuries early Sunday when an SUV plowed into her as she tended to the scene of a traffic collision on Interstate 35, police said.
Officer Julie Johnson, a two-year member of the Police Department, was airlifted to Brooke Army Medical Center with broken ribs and other internal injuries, police spokesman Joe Rios said.

In response to a wreck, Johnson was placing flares in the southbound lanes of the interstate near Laredo Street around 3 a.m. when a white SUV struck her, throwing her about 25 feet, a police report said.

The driver of the SUV told police he was trying to decide whether to take the upper or lower level of Interstate 35 when he swerved late to avoid the flares and struck a concrete barrier, blowing out a tire and veering toward Johnson.
Posted by Sam at 5:48 AM