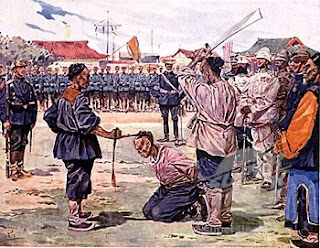 I don't know about you but biting babies hard enough to leave bite marks really doesn't sound like "playing with the baby".

Brownsville man found guilty in infant's death
Lynn Brezosky - Express-News
BROWNSVILLE — Jurors Thursday convicted a 43-year-old Brownsville man of capital murder in the death of his former girlfriend's infant son.
The punishment phase of the trial against Manuel Velez was to resume today. He faces life in prison or the death penalty.
The 12-member jury deliberated about six hours before deciding that Velez struck Angel Gabriel Moreno on the head with deadly force at the couple's home on Oct. 31, 2005. The child died after being taken off life support the next day — his first birthday.
Autopsy reports indicated burns, bruises, bite marks and other injuries that suggested a history of previous abuse.
Velez testified during the weeklong trial that he had tossed and bit the baby in play. He said he had threatened to report the baby's mother to authorities for child abuse.
Velez and the child's mother, 28-year-old Acela Rosalba Moreno, were indicted in January 2006 on charges of capital murder, murder and felony injury to a child.
Moreno, of Mexico, originally was charged with capital murder but pleaded guilty to injury to a child in an agreement to testify against Velez.
Posted by Sam at 5:51 AM