Cleaning (out) your house 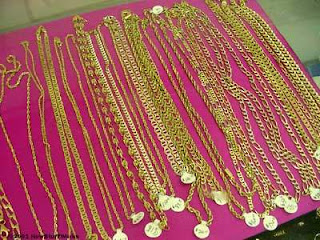 We see this up in Comal County at times as well.

Not only by cleaners but by handymen, plumbers, painters etc.
A lot of the times these things wind up in pawn shops who do not know these are stolen goods.

Maid service owners charged with 'cleaning out' clients
By Michelle Mondo - Express-News
When the Krystal Kleen Maid Service tackled a client's dirty home, they allegedly were cleaning out the client's valuables as well, county officials said.
On Tuesday, Bexar County Sheriff's Office detectives arrested Viola Gonzales, 48, and Roy Carranco, 45, co-owners of the cleaning company, after receiving a theft complaint a little more than a month ago, according to a county press release.
The couple is accused of stealing — and then selling off — jewelry from their clients' homes, the release said. The sheriff's office began investigating the pair after a homeowner called the office when jewelry was discovered missing a day after their house was cleaned.
Before the husband and wife called police, they asked Gonzales about the missing jewelry. Gonzales apparently returned one of the pieces, claiming that she and Carranco found it in the homeowner's vacuum bag, the release said.
The couple was charged with theft $1,500-$20,000 and were each released after posting a $2,500 bond.
Detectives discovered the pair has pawned hundreds of pieces of jewelry in various pawnshops throughout the city, including another necklace belonging to the victim who called in the complaint.
The victim of the theft, who asked not to be identified, said Gonzales and Carranco have been cleaning her home for about one year. She first heard of them through a referral and used the service several years ago as well.
She said the story about them finding a necklace in her vacuum cleaner made no sense and she believes the couple already sold off her other pieces of jewelry.
It's not just about the money lost, she said. Among the pieces still missing are some her husband inherited from his grandfather that have sentimental value. She said looking through the hundreds of photos of pawned, and possibly stolen, jewelry made her feel sick. She saw several wedding rings and engagement rings among the items.
"I think the community needs to be alerted and the community needs to be very careful about letting them into their homes to clean,” she said.
The cleaning service reportedly works at 50 to 60 homes in the city.
Efforts to reach the owners of the service were unsuccessful.
Officials are trying to find other theft victims. The sheriff's office asks that anyone who has hired the couple to clean a home or office during the past year and have missing items to call the sheriff's office Criminal Investigations Division at (210) 335-6070 and ask for Detective Buchanan.
Posted by Sam at 8:09 AM