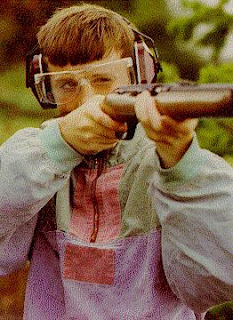 Remarkable restraint by the police in not shooting at him.

Man accused of shooting neighbor, aiming rifle at cops
By Alejandro Martinez Cabrera - Express-News
Police arrested a man who they say critically injured another man near Kelly Air Force Base and threatened to shoot police officers late Friday.
Officers responded to a dispute between neighbors around 9 p.m. near the 2400 block of Quintana Road, said officer Joe Rios, San Antonio Police spokesman. A shot was heard in the area and officers found a man on the ground with a gunshot wound in the abdomen.
While officers tended to the victim and tried to obtain information about his attacker, they noticed the suspect pointing a hunting rifle at them.
"They actually heard the suspect put a round into the chamber," Rios said.
The officers immediately took cover and the suspect fled. Police helicopters, SWAT operatives and the K-9 unit searched for the suspect within a 24-block perimeter surrounding Quintana Road for almost three hours. The suspect was found inside a shed behind a house, Rios said.
The suspect could face charges for attempted capital murder of a police officer on top of his charges for aggravated assault of an individual with a deadly weapon.
The victim was removed from the scene in an armored vehicle and was taken to Wilford Hall with life-threatening injuries.
Posted by Sam at 7:24 AM