Shithead is down the crapper 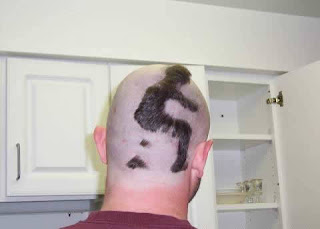 Ok then. Its done, he's toast, well of course there will be the appeals and he "smells" like a writ writer to me so there will still be much, much more fun with mr. jett in the future.

Bizarre murder trial ends in 99-year sentence
Graeme Zielinski - Express-News
A day after they were pejoratively called “The Dirty Dozen” in yet another outburst by murder defendant Richard Jett, a Bexar County jury sentenced the three-time convict to 99 years in prison Tuesday for the 2006 stabbing and beating death of 80-year-old Homer Lee Daniels.
Jett, 50, who was required by statute to be present in the courtroom, sat quietly in a wheelchair and spit mask while the sentence was handed down by 379th District Court Judge Bert Richardson.
Jurors had deliberated on Tuesday for 11/2 hours, about the same amount of time it took them Friday to find Jett guilty of murdering Daniels in June 2006 at his East Side home, where Jett had been a guest.
Prosecutors called witnesses to show that Jett continued to be a danger to the community and that his weeks of courtroom and holding-cell antics, which made it among the weirdest trials a Bexar courtroom had seen, were not symptoms of any mental illness.
Jett was ruled competent to stand trial three times, though it was acknowledged he had some mental problems. He had tried to represent himself, but was ruled unable to do so by Richardson and afterward treated the court to a rolling performance of bizarre behavior, including drawing on himself and smearing himself and his clothes with his own waste. He had also threatened to spit on guards and kill his attorney.
“There's a method to his madness,” said prosecutor Julie Wright Tuesday, citing earlier testimony by Jett's jailhouse psychiatrist.
“You can't come in here. You can't play these games. You can't kill an 80-year-old man for nothing and then expect to get away with it with tricks and games,” Wright told the jury of six men and six women.
Jett did no favors for his defense team, whom he had called “pretenders, not contenders,” on Monday.
His lawyer Albert Gutierrez tried to make the best of it.
“I come with nothing. I don't have anything. Nobody would come on behalf or Richard,” Gutierrez told jurors, recommending a 35-year sentence. “I'm asking you for just a little bit of grace.”
Posted by Sam at 6:53 AM