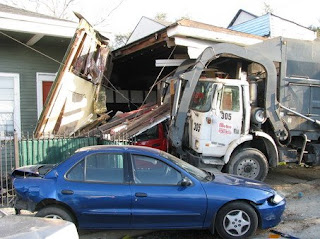 Its news articles like this that makes folks hate lawyers.

I understand why Mom's estate is being sued but most folks won't.

Dead children’s dad sues mom’s estate
The father of two children killed in a garbage truck wreck on U.S. 90 has filed a lawsuit seeking damages from the waste company, the truck driver and the estate of the children’s mother, who was behind the wheel.
Cynthia Maria Garcia was driving early in the morning of Sept. 26 with her two children, Desiree Esquivel, 9, and Abigail Esquivel, 6, when she apparently turned into the path of an Allied Waste truck. All three were killed.
No citations were issued in the wreck.
Bernardino Esquivel Jr., Garcia’s former common-law husband and father of the children, filed the suit Monday.
Calls to Allied Waste’s corporate headquarters were not immediately returned.
Carlos Uresti, Esquivel’s lawyer, said the suit was filed so soon after the crash in part to prevent the destruction of any evidence, such as the wrecked garbage truck.
Posted by Sam at 5:45 AM