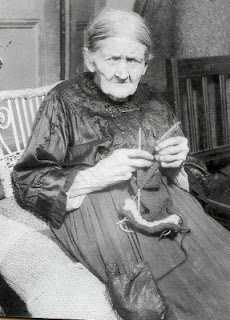 An 89-year-old grandmother who went on a tyre-wrecking spree in her street has been ordered to knit jumpers for her victims.

Heidi Kohl, from western Germany, was arrested after one neighbour spotted her slashing the tyres on a car. She later confessed that she had resorted to drastic measures after becoming "fed up" with so many drivers parking in her neighbourhood.

Kohl was initially told that she would be fined for her behaviour, but authorities came up with the more unusual punishment after the woman claimed she would be unable to pay.

A spokeswoman confirmed: "When she's knitted the sweaters, then the matter will be over for us."Kohl is believed to have wrecked 50 tyres in total. Prosecutors have said that she will not offend again as she has since been moved to a retirement home.
Posted by Sam at 7:23 AM