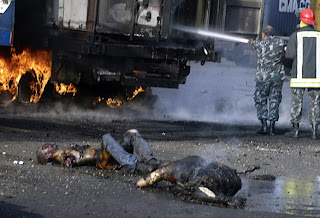 I'm pretty sure if the situation were ever resolved that drugs were involved or that it is a part of the drug wars in Mexico making its way north to the US.

Body found in burning van identified
David S Rauf - Express-News
The Bexar County Medical Examiner's Office on Sunday identified the charred remains of one of two people found dead inside a burning minivan Thursday morning as 20-year-old Carlos Alvarado-Ordorica.
Alvarado-Ordorica, a Mexican national, and another still unidentified person were shot multiple times before being set on fire inside a van in a West Side neighborhood, according to the medical examiner's office. Their deaths have been ruled a homicide.
The other occupant of the van has not yet been positively identified, but authorities at the scene Thursday said they believe it is a woman due to the noticeably “smaller frame.”
Emergency crews responding to a vehicle fire at the intersection of Silvercrest Road and West Horseshoe Bend discovered the bodies around 4:50 a.m. Thursday. The two were found lying next to each other in the back of a smoldering 2001 Dodge Caravan.
Posted by Sam at 6:57 AM