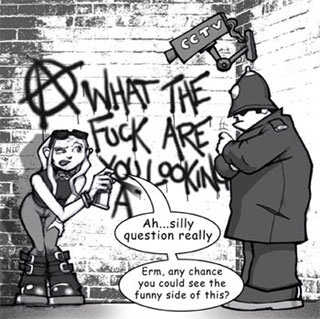 Its about time to start getting tougher with taggers.

Untold amounts of money and time are lost to these narcissistic assholes.

Its also pretty depressing to look at in some of the parts of town.

City Council wants to get tougher with taggers
Guillermo X. Garcia - Express-News
Drawing, but not painting, a line in the sand, the City Council wants permission from the state to get tough with graffiti offenders by requiring mandatory jail time or driver's license suspension for first-time taggers.
The problem is so out of hand in some parts to town, council members said Thursday, that they want discretion to lay out more stringent penalties for those responsible for what some city officials are calling a tagging epidemic.
In approving the city's legislative agenda, the council directed city staff to work with Bexar County lawmakers to draw up proposals that would significantly toughen graffiti laws. The proposals would be considered by the next Legislature, which convenes in January.
The council's get-tough wish list also includes a surtax on the purchase of aerosol spray paint cans; a list of convicted taggers — much like the one required for registered sex offenders — and a sliding schedule that ties fines to the amount of monetary damage caused.
Convicted taggers now face anywhere from a Class B misdemeanor to a jail-time felony, depending on the severity of the offense and the type of paint used, a San Antonio police spokeswoman said.
While representatives of council districts inside Loop 410 say the problem is particularly acute, all agreed taggers are hitting all parts of the city.
“We are dedicating about $8 million (in the current fiscal year) for graffiti abatement,” District 10 Councilman John Clamp said. “And we need to send a strong message to the Legislature about the importance of this issue to our community.”
In an exchange with District 4 Councilman Phil Cortez, Intergovernmental Affairs Director Andrew Smith acknowledged staff is considering a number of measures to more strongly penalize those caught tagging public or private structures.
“The consensus from council is that this is a public nuisance,” Smith said. “We need to get serious about it and address this citywide problem in every way that we can.”
Led by Cortez, whose district straddles the South and West sides where the problem appears more acute, council members said they want a mix of proposals to consider.
But they left no doubt they want penalties with more of a bite than current law provides. For example, the staff was instructed to consider a mandatory 24 hours in jail for first-time offenders.
“If the idea of a night in jail isn't something to grab their attention,” District 5 Councilwoman Lourdes Galvan said, “maybe taking away their driver's license will get them to understand that we are serious about increasing the penalty for those who get caught.”
She also suggested a reward fund be set up for those who turn in taggers.
Posted by Sam at 5:05 AM