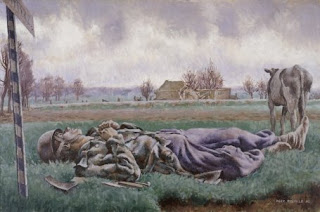 Its harvest time I guess.

Body found in field had puncture wounds
- Express-News
Police have few details in the death of a man whose body was found Thursday afternoon by maintenance workers in a field off Somerset Road.
San Antonio police Detective Robert Blanton said the body was found just after 4 p.m. in the field in the 9400 block of Somerset.
Blanton said the man, who appeared to be in his mid-20s, suffered puncture wounds to his torso but said it would take an autopsy to determine what caused the wounds.
Blanton said it appeared the body had not been out there for a long time. Investigators did not know where the man was killed.
Posted by Sam at 6:33 AM