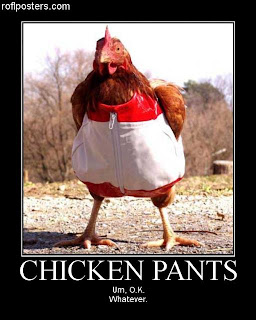 That's a whole load of stuff down your pants, Dude.

ROME, Ga. -- Authorities said a north Georgia man was arrested after police said he stuffed a rotisserie chicken, chicken wings, a mouth guard and two toothbrushes down the front of his pants and walked out of a Walmart without paying for the items.

Police said the man left the store through its Garden Center with the items in his pants on Tuesday afternoon.Floyd County Jail and Rome police reports state that 27-year-old Joseph Lee Stringer of Kingston was charged with shoplifting.

Stringer could not be reached by phone Wednesday, and it was not known whether he has an attorney.
Posted by Sam at 8:20 AM