Are you happy to see me? Or is that just a monkey in your bra? 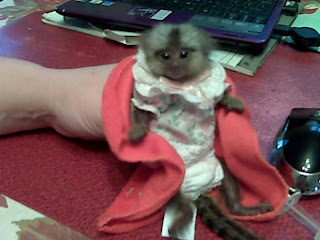 AMHERST, Va. (AP) — A woman turned a few heads when she walked into a rural Virginia courthouse with a tiny monkey clad in a pink-and-white dress tucked in her bra.

The woman brought the palm-sized marmoset to Amherst County Courthouse on Thursday for a hearing in Juvenile and Domestic Relations Court. Officials apparently didn't notice the monkey until the woman went to an office to complete some paperwork.

In an interview with The News & Advance of Lynchburg, the woman says the marmoset is 7 weeks old and requires constant attention.

The woman tells the newspaper she bought the animal on an online auction site and had its clothes specially made in West Virginia.
Posted by Sam at 5:10 AM