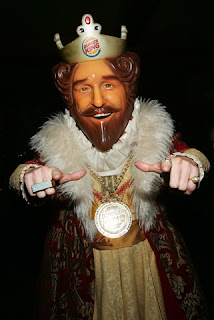 Rioting at the local Burger King.

Unbelievable.  The woman who did this is a 23 year old mother of four children. (TSG reports she has 4 children)

What, if anything was she thinking?

Employees dialed 9-1-1 for help, as one bikini-clad woman, later identified as Kimesia Smith of Montgomery, Ala., jumped up on the counter and threw a charity coin jug at employees, and 3 of Smith's friends also began throwing napkins, utensils, and trays throughout the location.

The woman in the bikini, who became concerned about the whereabouts of her two children after Panama City Beach Police placed her in handcuffs, was taken to the Bay County Jail on charges of simple battery, in part because of allegations she pulled a Burger King employee's hair. Beach police contacted a friend of the woman, who told police she would take care of Smith's children.

The video has already been watched thousands of times, but be warned, there may be some harsh language overheard as the out of control group destroyed the Burger King.

The rest of the story and video:
Posted by Sam at 7:10 AM