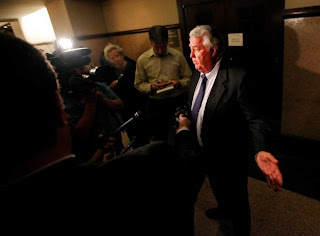 Well.  There you go.

You tell jurors not to do things.  You know little things like DON'T do your own  legal research.

But, they still do the stupid stuff like ignore the Judge's instructions and now all of the time spent in trial.  All the man-hours spent to prepare, talk to witnesses, pick a jury is all for naught.

Mike Sawyer did what he had to do which was ask for a mistrial due to the jury misconduct.

A high-profile murder trial involving a San Antonio man who killed a college student in the street outside his house was derailed Wednesday evening after allegations of juror misconduct surfaced.

The 11-woman, one-man jury had been deliberating Ray Lemes' fate for nearly seven hours when it sent out a note indicating that one of them had looked up the legal definitions of “murder” and “manslaughter.”

Jurors are instructed not to conduct outside research.