Fugitive turns herself in 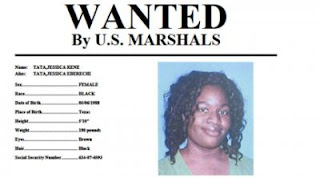 This woman was wanted in connection with a deadly fire at her home day-care center.

She allegedly left the children in her home day-care center alone while she went shopping at a near-by Target.

She had fled the country after the incident.

She has apparently turned herself in to authorities in Nigeria.


A woman who fled to Nigeria after a fire at her west Houston day care killed four children last month has surrendered to authorities, her brother said Saturday.
Jessica Tata faces 14 charges, including four counts of manslaughter, in connection with the Feb. 24 blaze at Jackie's Child Care. Officials have said that Tata, 22, left seven children unattended and oil cooking on the stove while she shopped at Target. She fled to Nigeria before being charged.
Her brother, Ron Tata, 26, said she turned herself in around 11 a.m. Saturday. According to his relatives in Nigeria, workers at the U.S. Consulate in Lagos traveled to Port Harcourt to take her into custody, he said.
"She planned to do it a couple days ago, and they came over to pick her up after she called them and said she wanted to turn herself in, basically," Ron Tata said.
The rest of the story:
Posted by Sam at 8:06 AM