Too clever by half 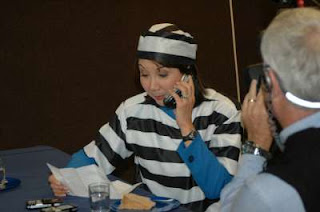 Preying on the elderly happens everywhere it seems.

Five inmates in a Siberian jail have had their terms extended after a court found them guilty of stealing money from the elderly in a series of phone scams.

“The prisoners in the Novosibirsk colony were calling retirees in the town of Yurga. They demanded large amounts of bail money from the elderly victims, ranging from $180 to $83,000, claiming to be relatives who had got into trouble,” police spokesman Vladimir Sergeyev said.

The court extended the prisoners' sentences from nine months to three years and ordered the inmates to pay their victims $10,600 in compensation.

A cab driver who delivered the money to the fraudsters received almost three years behind bars, Sergeyev said.
Posted by Sam at 7:27 AM