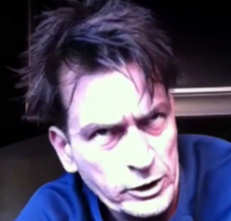 I've liked Charlie Sheen.  I've liked his work, his private life not so much.

I've never watched Two and a Half Men so I don't know how good it is or was.

But the man definitely needs help.

Sacked Two and a Half Men star Charlie Sheen used his first opportunity to comment on his dismissal to deliver a scripted, near-indecipherable rant against his former colleagues.

"What happened yesterday was completely and entirely illegal, unconscionable and to quote my lawyer 'really shitty shitty suck suck'," he said before launching into a bizarre diatribe in his fourth "Sheen's Korner" webcast.