Burritos and gas prices up. But isn't that just saying the same thing? 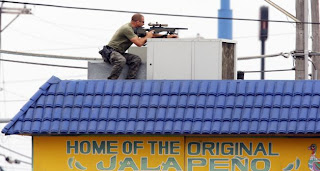 Who could blame him?

It was, after-all, a 50% increase in the price of his Beefy Crunch Burritos.

BTW that was sarcasm, okay?

The Beefy Crunch Burrito incident
Man upset by price gets in shootout with police; no one hurt.
By Michelle Mondo - Express-News

The price of the Beefy Crunch Burrito had gone up from 99 cents to $1.49 and the man at the Rigsby Road Taco Bell drive-thru had just ordered seven.

The fast food customer was so disgruntled by the price hike he shot an air gun at the manager, displayed a semiautomatic assault rifle and pistol while in the restaurant's parking lot, fled as police were called, exchanged gunfire with three officers who pulled him over, then barricaded himself in his hotel room — all over $3.50 plus additional tax.

The final incident in the burrito-triggered spree happened Sunday afternoon at the Rodeway Inn on North W.W. White Road, engaging SWAT negotiators in a more than three-hour standoff, according to officials and witnesses.