Might be better to get a different defense, no? 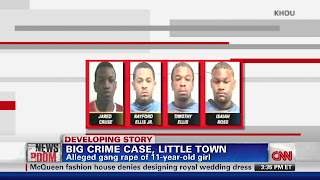 This is a novel defense isn't it?

No, my clients knew the girl was 11 years old but had sex with her anyway?

Attorney James Evans, hired to defend some of the 18 suspects accused of gang-raping an 11-year-old girl in the East Texas town of Cleveland, said on a radio talk show that those participating were “absolutely” aware of the girl’s age.

Evans couldn’t be reached Friday for comment about his remarks to Gil Gross, who hosts a talk show on KGO in the San Francisco Bay Area.

But on the recorded broadcast Thursday, Gross asked Evans: “But what is going to be your defense for your clients for having sex with an 11-year-old girl? Who many of them knew. ... to be in middle school.

So there was no doubt about her age?”

To which, Evans answered, “Absolutely not. There was no doubt about her age.”